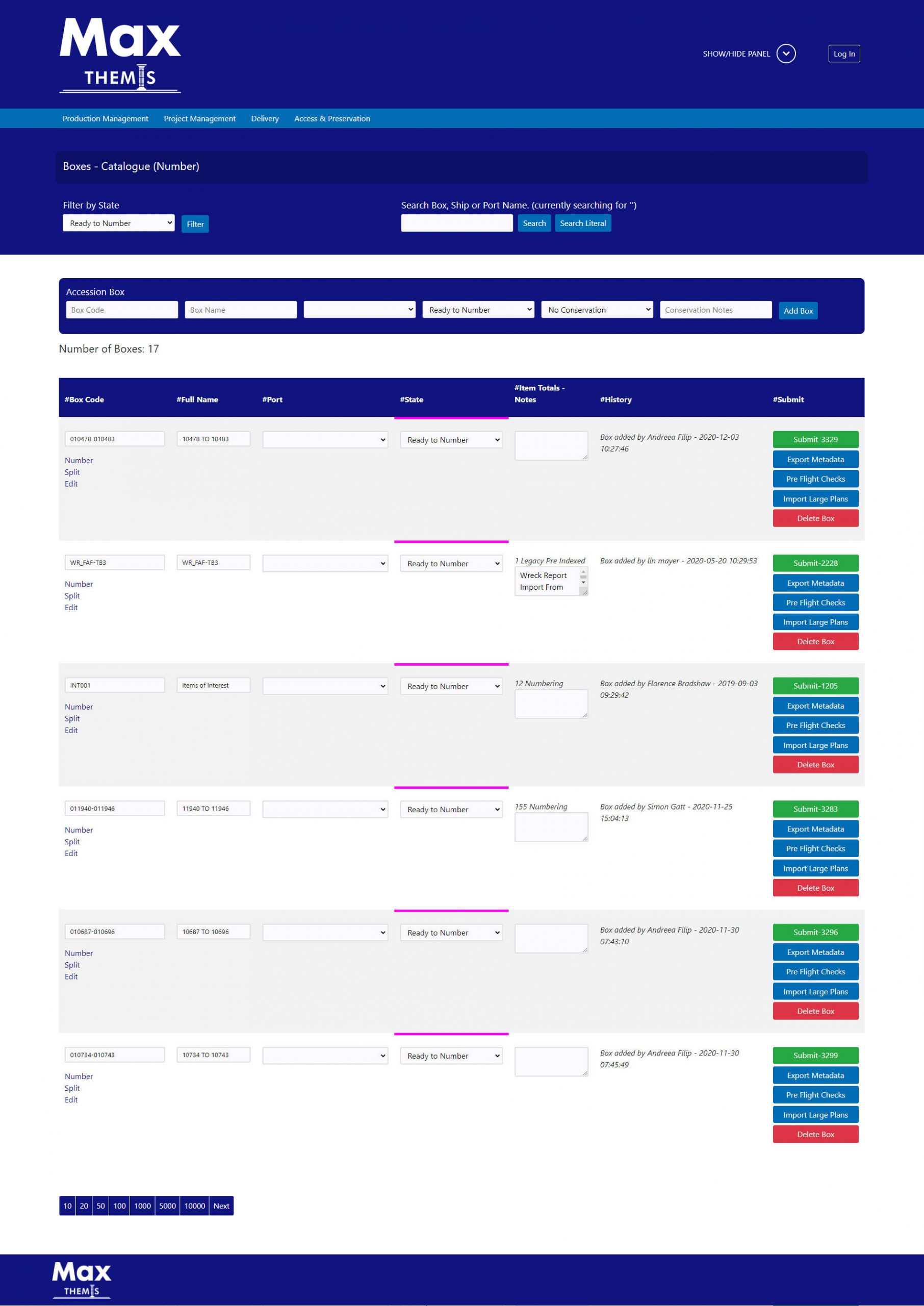 THEMIS is a feature-rich, browser-based digitisation production and project management tool allowing users to track the progress of images through the production process. THEMIS allows for meta data harvesting from scanned documents and image manipulation by proxy .jpg including batch rotation and splitting of images.

To find out more about Max's THEMIS project management software please use the buttons below or call us on 0208 309 5445.

Changing the order in which we digitise has two major benefits: first, it allows access to the digital images to be opened up sooner; second, the cataloguing and indexing process is far more efficient – the relevant data fields can be entered against the corresponding image on a screen, directly into a structured database, rather than having to key into a spreadsheet against the physical item.

During the indexing and transcription process, THEMIS is able to access and accommodate any existing catalogue information while allowing the addition of further metadata post digitisation. THEMIS makes the cataloguing and indexing process far more efficient - rather than matching spreadsheet records against physical items, THEMIS allows the cataloguer to enter the relevant data fields directly into a structured database against the corresponding image.

I have worked with Max Communications and the team for some years. In recent work with their Archivematica iteration in the College Archives and Corporate Records Unit, and other digital work required by varying cohorts in Imperial, Max Communications have been responsive, innovative and demonstrated great problem-solving abilities. The Max Communications team, from the top down, is approachable, friendly and keen to help.

An example is in their engagement for some major confidential scanning projects. The projects were discussed, scoped and agreed to a high standard of hand scanning. Benchmarking was agreed to our satisfaction when the project started, with a fast progress time for the work. They provided rapid access to files, including digitising out of sequence, e.g. one such turn around for hand scanning, editing and proofing a large file was within 3 hours. The digital delivery was by secure online transfer, and the hard disks and hard copy delivered securely by courier.

On a lighter note, digitisation of 1960s academic cine film was carried out promptly and to a high standard, such that it can be reshown at a major conference

THEMIS for Digitisation Production and Project Management
We use cookies on our website to give you the most relevant experience by remembering your preferences and repeat visits. By clicking “Accept All”, you consent to the use of ALL the cookies. However, you may visit "Cookie Settings" to provide a controlled consent.
Cookie SettingsAccept All
Manage consent

This website uses cookies to improve your experience while you navigate through the website. Out of these, the cookies that are categorized as necessary are stored on your browser as they are essential for the working of basic functionalities of the website. We also use third-party cookies that help us analyze and understand how you use this website. These cookies will be stored in your browser only with your consent. You also have the option to opt-out of these cookies. But opting out of some of these cookies may affect your browsing experience.
Necessary Always Enabled
Necessary cookies are absolutely essential for the website to function properly. These cookies ensure basic functionalities and security features of the website, anonymously.
Functional
Functional cookies help to perform certain functionalities like sharing the content of the website on social media platforms, collect feedbacks, and other third-party features.
Performance
Performance cookies are used to understand and analyze the key performance indexes of the website which helps in delivering a better user experience for the visitors.
Analytics
Analytical cookies are used to understand how visitors interact with the website. These cookies help provide information on metrics the number of visitors, bounce rate, traffic source, etc.
Advertisement
Advertisement cookies are used to provide visitors with relevant ads and marketing campaigns. These cookies track visitors across websites and collect information to provide customized ads.
Others
Other uncategorized cookies are those that are being analyzed and have not been classified into a category as yet.
SAVE & ACCEPT